Now that we’ve had a chance to see actual post-Durbin processing volume, data shows that most businesses save significantly on debit volume thanks to the Durbin Amendment. The only exception to this is businesses with small tickets, or those on tiered pricing. Small ticket merchants have seen costs increase because of Durbin, and merchants on tiered pricing allow their processors to pocket their Durbin savings.

How are businesses with small tickets an unexpected (or expected, depending on whom you ask) casualty of the Durbin Amendment? Let’s take a look.

Visa, MasterCard and Discover collectively have several hundred different interchange fees for their respective brands, and each determines under what circumstances a particular fee applies. Variables such as card type, card brand, processing method, and transaction amount are all considered when determining which interchange fee will apply to a particular transaction.

For example, 1.51% plus a $0.10 transaction fee is the interchange fee that applies to a swiped Visa branded consumer credit card where the transaction amount is greater than $15.

As you can see from this one example, interchange is complicated. That’s probably why Senator Durbin’s office failed to consider the impact of his amendment on businesses with small tickets.

What the Durbin Amendment Did

The Durbin Amendment is an amendment to a larger bill, the Dodd-Frank Wall Street Reform and Consumer Protection Act. Among other things, the Durbin Amendment capped the fee that businesses pay banks when they accept a debit card. The cap is 0.05% plus a flat $0.22 cent transaction fee. It applies to cards issued by banks with $10 billion or more in assets.

Visa and MasterCard want their credit and debit cards to be a competitive method of payment, and they realized that a $0.10 transaction fee would particularly impact businesses with a small average ticket.

So, they created special small ticket interchange fees of 1.55% plus $0.04 that apply to swiped transactions of $15 or less involving non-reward credit or debit cards, knowing that a smaller per-transaction fee (even with a slightly larger percentage fee) would be more beneficial to the business.

The result is that businesses with a small average ticket no longer get special treatment on regulated debit transactions. This is especially damaging since consumers use debit cards far more frequently than credit cards to pay for small transactions.

Here’s a snippet from a processing statement of a café that used CardFellow to find a credit card processing company. Since we provide free lifetime monitoring, this business sent statements to us asking why their fees increased dramatically in October.

Take a look at the business’s September processing statement. Visa and MasterCard’s small ticket debit interchange categories account for the majority of volume, and the transaction fee for each is only $0.04.

Now, fast forward to October’s statement and we see debit interchange split into regulated and unregulated categories due to Durbin. You can see that volume from debit cards issued by unregulated (small) banks is still at the special small ticket interchange, but volume for debit cards issued by regulated (large) banks is at the capped post-Durbin limit. Unfortunately, the capped rate’s $0.22 transaction fee is much higher than the uncapped $0.04 fee. This difference increases processing costs substantially for small ticket merchants.

The reason for the two regulated categories for MasterCard is because the merchant accepted a regulated card issued by a bank that did not meet the fraud guidelines. In these statements, we can see the Durbin Amendment’s effect on small tickets in action, in a real-world example. Unfortunately, the Durbin Amendment will negatively affect businesses that routinely process small transactions.

As of autumn 2016, Congress is reconsidering the Durbin Amendment as part of a larger proposed rewrite of the Dodd-Frank Act. Retail groups like the National Retail Federation oppose the repeal. The NRF claims that Durbin has saved consumers (and businesses) billions since its inception. It’s up for debate whether businesses have really passed the savings to consumers, but it’s true that the Amendment has saved some businesses money. Unfortunately, it has also cost other businesses more. 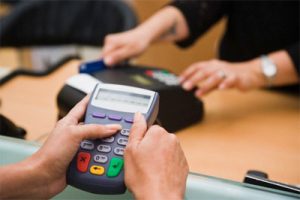 What is PIN on Glass for Debit Card Processing?