Using tablets as a POS system replacement is becoming more and more popular with restaurants and bars.

You’ve probably seen wait staff carrying tablets to let customers pay tableside, or noted the sleek, low-profile systems at trendy bars. While many smaller establishments use a tablet at the counter, Olive Garden, Panera Bread, and Chili’s are among the major restaurant chains using them at tables. These tablets allow diners to view menus, order food, surf the internet, play games, use apps, and even pay their bills.

Restaurants and bars are often slower to adopt new technologies, but with tablets being implemented at thousands of locations around the country, new levels of data analytics are available that indicate the switch may be worthwhile. In this article, you’ll learn how tablets can be used to optimize occupancy rates and revenues for your restaurant. And if you haven’t already, check out our top five recommendations for tablet POS systems.

Several tablet applications allow customers to order at the table. One of the most well-known is Ziosk, who manufacturers the tablets used in the restaurants mentioned above, as well as at Uno’s and Red Robin.

Ziosk tablets are free up front; the company instead charges monthly subscription fees out of premium content sales, and then works on a 50/50 cut for further premium content above and beyond that mark.

Although running on Android tablets, Ziosk utilizes Microsoft’s Azure cloud technology to connect to backend systems. This ensures special orders, inventory, and timing considerations are all met, providing diners with an efficient experience.

Of course, the success of Ziosk’s ‘Hardware as a Service’ business model spawned several imitators, including TableSafe and pay-at-the-table from leading processing equipment manufacturer Ingenico. Each offers comparable pricing models.

The standard Ziosk tablet comes with menu and pay functionality pre-installed. These tablets allow visual and animated menus to be used, which increases customer engagement by up to 85%, according to Ziosk’s website.

Restaurant owners can also choose to enable access to premium features such as games, social media, and other apps. When customers use these options, the premium charges are added to their bills.

Some games and apps cost a fee (typically $1 for unlimited gaming access) to play, while browsing the Internet and watching video content is charged through a time-per-usage model. These charges are automatically tracked and tallied on the customer’s bill.

More entertainment options are constantly being added and can both be customized to the restaurant and personalized to the diner. This helps make a unique experience that can bring customers back and encourage them to spend more money on each visit as well.

As Vanessa Wong at Bloomberg BusinessWeek reported, these tablets have been effective in raising the per-person average bill at restaurants that implement them. Diners order desserts and appetizers 20 percent more often, and the default suggested tip of 20% has encouraged diners to tipping above the standard 15%, despite being less reliant on human servers.

A recent poll by SmartBrief found the average diner spends between 30 minutes and one hour eating at a sit-down restaurant. Ziosk estimates its system shaves up to 5 minutes off this time. This is an 8-17% decrease in time that will really come in handy during busy lunch and dinner hours, allowing faster turnover.

Typical restaurant seating is done manually, on paper, but with tablets on each table, not only is ordering is much more streamlined, but restaurant managers can gather data to learn which tables are occupied and which are vacant.

Wait times to be seated at a busy restaurant can often exceed an hour and many times diners will simply move on to the next place instead of waiting. While outdoor seating can help alleviate capacity issues and cut these wait times, it simply adds more tables for the staff to keep track of.

How a tablet POS is utilized at the table depends on the type of establishment. A casual restaurant like Chili’s or Olive Garden is focused on turning tables faster, while a fine dining establishment focuses on increasing the per-person average. Depending on how it’s implemented in a restaurant, tablets can help either goal.

It’s important to understand that tablets don’t replace a server – they’re simply tools that supplement the server’s functions, making it easier for patrons to flag someone when they need help, add additional items like desert, get a drink refill, or pay the bill.

Austen Mulinder, CEO of Ziosk, has touted his payment system’s security throughout the media, though there is a bit of sales fluff in his statements. According to Mulinder 60% of credit card fraud at restaurants is actually committed by the servers. Studies back up his claim, showing around $200 million is lost by the restaurant industry every year due to credit card skimming.

Implementing tablets at the table doesn’t necessarily reduce this risk, and in fact it may increase it. Credit card skimming devices have already been created for gas pumps, self-checkout terminals, and more. Servers aren’t the only people with access to tabletop tablets; every customer that’s been at that table could add a skimmer.

While Mulinder credits Ziosk tablets with helping prevent skimming fraud, the only real defense against this (aside from customer vigilance) is chip cards. Because information is stored in a digital format on chips vs. an analog format on magnetic strips, chip card transactions are fully encrypted at all times.

Many tablet-based POS systems are PCI compliant, so the transaction is secure and encrypted once the card is swiped. Thus far no credit card fraud has been reported from tabletop tablets, but that doesn’t mean it’s not possible.

Tabletop tablets in restaurants are similar to self-checkout terminals at grocery and retail stores. They allow customers to efficiently place and pay for their order without the need of a server’s intervention.

The tablets are rugged and secure, and have been proven to raise the average amount spent while also reducing time spent at the table. This provides restaurants with higher order averages in shorter times, thus optimizing its occupancy rates.

Interested in finding the right tablet POS system for your bar, café, or restaurant? Check out our POS system directory to find the perfect fit.

5 Benefits of Credit Card Processing Integrated with Your POS System 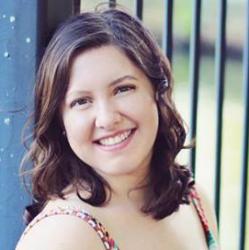 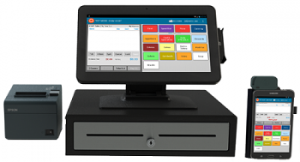 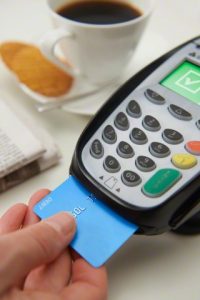 Is It Legal for Employers to Deduct Credit Card Processing Fees from Tips?