Talus Payments is one of those companies that has a confusing history of name changes and unclear associations with other payment processors.

The company was formerly called Future Payment Technologies (or Future Pay Tech) but has changed its name to Talus.

Future Payment Technologies is/was somehow affiliated with a company called Crescent Processing, which may have just been its parent company. Crescent Processing is listed online as permanently closed. Crescent, Future Pay Tech, and Talus all have/had the same physical business address, so it’s reasonable to assume that they’re all the same company, now operating solely as Talus.

Checking Future Pay Tech’s reputation online suggests that there were a lot of unsatisfied businesses, which may account for the name change to Talus. So, is the company doing better by its clients with the new name change?

In this review, we’ll take a look at Talus’ services, costs, and updated reviews from clients. 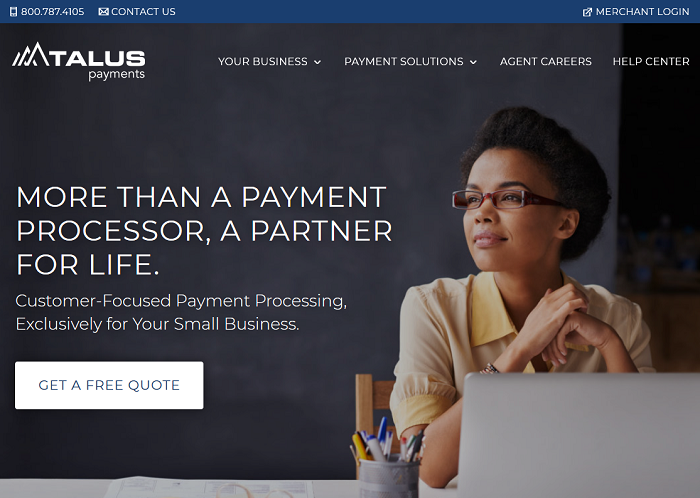 Talus’ gift card program provides physical, electronic gift cards. You can choose between preset amounts or allow customers to choose their own amount at the time of purchase, and decide if you’d like to offer reloadable or one-time-use cards with an expiration date. Talus doesn’t provide details on minimum order quantities or customization possibilities for cards. We’ve reached out to the company for more information.

For businesses looking for funding, Talus offers working capital programs, which allow you to “sell” a portion of your future credit card sales in exchange for upfront money. You’ll repay the funds through an automatic deduction of a percentage of your daily credit card sales. Funds can be used for almost any business expense, including hiring, purchasing inventory, advertising, remodeling, and more. It’s free to apply and Talus claims funds will be deposited in 3-5 days for approved applications.

Talus states that equipment is “included” so there’s no additional fee. In some cases, free equipment comes with higher processing rates, so be sure to compare all charges when considering your options for a processor.

The free equipment is limited to your first terminal, which will typically be a countertop model that can accept EMV chip cards. The Talus website shows a Verifone Vx520 as the free terminal that’s included. You can also use a mobile reader, but there will be fees for activation and using wireless.

If you’d prefer a machine other than the free terminal option, Talus provides a choice of models in the Verifone line, as well as an IDTech magnetic strip card reader for virtual terminal payments and an IDTech headphone jack mobile reader for taking payments with a smartphone or tablet. The headphone jack reader works with Android and Apple devices.

Like many processors, Talus doesn’t publish pricing on its website. Not to worry – you can request a no-obligation quote without giving out your contact information by using CardFellow’s free quote comparison tool. Try it now!

While Future Payment Technologies largely rates as 1-star on review sites online, Talus Payments is doing a little better. The company has a 3.6-star review on Google reviews from 33 ratings and an A- grade at the Better Business Bureau.

The 5-star reviews praise Talus for excellent rates and helpful customer service, though more than one customer mention being with the company for several years longer than Talus has been operating under that name. Many of the 5-star reviews simply provide the star rating and no text commentary. The 1-star reviews complain that Talus cold calls even to people on the Do Not Call list, that customer service is unhelpful, that the company debited money almost immediately after sign up, that the sales reps use deceptive tactics to get businesses to sign up, that there are hidden fees, and that the company can’t be trusted.

Talus has been accredited with the Better Business Bureau since spring of 2017, which appears to be when it changed its name. The company has an A- rating at the time of this review, though it does have 10 customer complaints and 9 negative reviews compared to 2 positive reviews.

One negative review complains that Talus regularly hold funds from larger transactions, however, Talus responded to the complaint claiming that the reviewer failed to mention that the transactions were run for another company, which would be prohibited as laundering. Other reviews complain of sales reps attempting to get business owners to sign contracts before giving details of pricing and that Talus repeatedly calls businesses even when asked not to call anymore.

The formal complaints accuse Talus of incessant cold calls, holding funds with no warning, and continuing to deduct fees from the business’ account after cancellation.

The positive reviews say that Talus explained processing options in detail and that staff was very professional. Both reviews praised individual customer service reps for their assistance.

Have you used Talus? Leave a review!

Write a Review
There are no unverified reviews for this processor
Review sent
Great. We've sent your review
and it will be online
shortly