According to the Department of Justice, two executives of a credit card processing company have been charged with fraud. The executives, who worked for Commerce Payment Systems, are accused of perpetuating a scam against thousands of small businesses and obtaining more than $30 million through overcharging and deceptive tactics.

In this article, I will lay out the allegations and show you how to avoid potential scam practices when choosing a credit card processor for your business.

The Justice Department’s notice alleges that the two men, “…operated a fraud scheme founded on false claims of very low fees, along with false promises that there were “no hidden fees,” and that rates were “guaranteed for life.” In truth, however, CPS customers were charged all manner of hidden fees, and [executive] subsequently altered customer accounts to add even higher fees.” 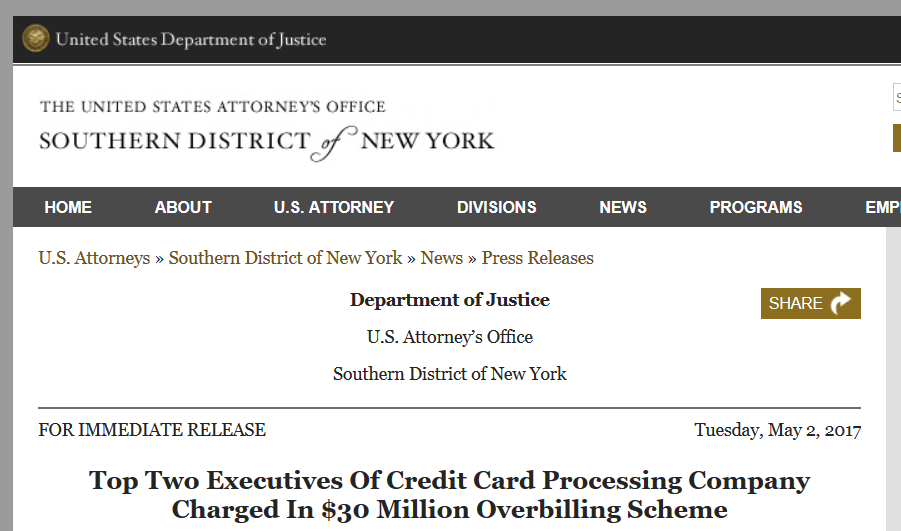 The accusations conclude with, “When internet ratings of CPS became particularly negative, [the executives] surreptitiously created a series of other corporate names, each with its own email domain, internet web page, and phone number, to operate their scheme free of the negative reviews.”

Reading these allegations may alarm some small business owners. After all, many processors promise low fees, offer a cost comparison calculator, or have some negative reviews online. The good news is that fitting any of these criteria doesn’t automatically mean a processor isn’t reputable, but it’s always good to exercise caution. Let’s take a closer look at each of those pieces individually.

Many processors promise low fees and no hidden fees. “Low” is a subjective term, but “no hidden fees” is much easier. Processors that promise “no hidden fees” should disclose all costs to you before you sign up, and should not charge extra fees after you begin processing.

One thing you’ll want to watch out for is “qualified” and “non-qualified” rates. This indicates a tiered pricing model, which allows the processor to arbitrarily assign a more expensive rate to some of your transactions. While technically not a “hidden fee,” non-qualified rates raise your overall cost to process.

Tiered pricing is legal, and processors often use terms like “starting rates” to avoid falsely representing the costs, but in most cases, the starting rates are not what you’ll end up paying. Reviews for Commerce Payment Systems on Yelp indicate that the company used a tiered pricing model, though the company’s website is no longer available as of May 2017, so we’re unable to examine the wording regarding pricing.

By itself, guaranteeing rates for life isn’t a scam practice, and in fact, we offer that with processors through CardFellow. We don’t know how Commerce Payment Systems was promising the guarantee and can’t speculate on why it was considered fraudulent. The Justice Department alleges that CPS added higher fees later on, which would invalidate the claim of rates guaranteed for life.

This is a good time to explain a lifetime rate lock in processing. At CardFellow, all of the certified quotes from processors in our marketplace come with a lifetime rate lock on the processor’s markup. This means that from time to time, your overall cost may rise or fall depending on the wholesale cost of your processing. Every time you accept a credit or debit card, there are multiple components – interchange, assessments, and processor markup. Interchange and assessments are non-negotiable, and we refer to them as the wholesale cost of processing. Interchange is paid to the banks that issue credit cards while assessments go to the credit card companies themselves.

There are hundreds of interchange categories and several assessments, so the actual cost you’ll pay fluctuates depending on what type of cards you accept in a given month and what Visa and Mastercard have set as the current rates.

At CardFellow, processors who place certified quotes charge interchange and assessments at true cost – that is, at the costs Visa and Mastercard set. But remember, that’s the “wholesale” cost. If that’s all the processor charged, they wouldn’t make any money, as it would all go to the banks and the card companies. To make money, the processors add a small markup, which is what they keep as their cut. We require a lifetime rate lock on that markup. That means that occasionally, the costs to the banks or to the card companies may change, but the rate you pay to your processor (the cost over wholesale) doesn’t change.

Some processors have “cost comparison calculators” on their websites where you enter your current monthly sales volume and average transaction size and the calculator shows you how much you would save.

The problem with these calculators is that they’re not necessarily accurate for your particular business. In the previous section of this article, I mentioned that there are hundreds of interchange categories. Since each interchange category has a different cost associated, the type of cards you take will have a big impact on your total costs. If you accept a lot of debit cards, your costs will be very different than a business who accepts almost no debit cards. Similarly, if you take a lot of rewards credit cards or corporate credit cards, your rates can vary quite a bit. These calculators don’t know what your current mix of cards actually looks like, so the savings is a guess at best and intentionally misleading at worst.

Some of the more advanced calculators can get a little closer to accurate by requesting more information such as your industry and how you accept cards, but without knowing what you’re currently paying and without seeing your card mix, how can the calculator tell you how much you’d save by switching? It can’t.

At CardFellow, we don’t offer a cost comparison calculator. Rather, we offer a marketplace where you can get actual quotes from processors. If you need to know the specific savings compared to your current processor, we do a statement analysis that uses your actual card mix and your current fees to see how it stacks up with the quotes you received.

Note that it’s generally not a good idea to send your processing statements to a processor until you receive quotes. Otherwise, the processor can slightly undercut your current pricing (or appear to) instead of offering the absolute best pricing first. This is why, at CardFellow, we always suggest getting quotes through our marketplace before sending statements.

Most companies that are in business for any length of time will get a negative review at some point. Large companies may even have quite a few negative reviews. When do you know if it’s a problem? In processing, it can be tricky. We’ve warned businesses before about the pitfalls of credit card processing reviews, but it’s tempting to scour review sites as part of research when deciding on a service.

Here are some general things to look for:

Keep in mind that reviews are not an ideal way to decide on a credit card processor. Processors set pricing and terms on a business-by-business basis, so the offer you get from Processor A won’t necessarily be the same deal that John’s Books received. When reading a review of the processor that John’s Books wrote, it’s important to remember that you’re not necessarily getting the same service or “product.”

Some things in processing may technically be legal or not fraudulent. But they can still be considered red flags that you’ll pay more than you have to. It’s often easier to spot these red flags if you’ve already seen them once and know what to look for. We maintain a spoof website that highlights pitfalls and red flags often employed by processors. Check out Fuzzy Credit Card Processing to see it in action and click the red exclamation points for an explanation.

Of course, you can skip the headaches and the hours of research by using a marketplace comparison service, like CardFellow.com. You’ll get real, fully disclosed quotes with a lifetime rate lock on the markup. Additionally, you’ll receive expert assistance to ensure that you get the pricing you were quoted. Our service is free to use, no-obligation, and we keep your contact info to ourselves. (No annoying sales calls from processors!) Give it a try by signing up here.