A more cost-effective, transparent alternative to tiered merchant account pricing is available to businesses that know enough to request it.

What is Tiered Pricing?

Tiered pricing is a merchant account rate structure that credit card processors use to assess charges. It is also referred to as bundled pricing because it allows processors to group interchange fees into general rate tiers of their choice.

Bundled or tiered pricing can be identified in a couple of different ways, the easiest of which is to look for the qualified, mid-qualified and non-qualified rate tiers after which the pricing model is named. The sample statement below, taken from our article about how to read an Intuit merchant statement, provides a quintessential representation of how tiered pricing is shown on a merchant account statement.

The terms “qualified,” “mid-qualified” and “non-qualified” are often abbreviated. Be sure to look for variations of the terms when identifying tiered pricing. For example, the terms are abbreviated on Intuit merchant services statement above as “qual,” “mqual” and “nqual,” respectively.

In the absence of terms “qualified,” “mid-qualified” and “non-qualified,” tiered pricing can also be identified by a consistent set of rates across all card brands. These rates will generally be in the area of 1.65% – 3.25%, but may be higher or lower depending on how many tiers a processor is using. The sample statements below show examples of tiered pricing identified through consistent rates across all card brands.

In this processing statement, we see a rate of 2.00% for Visa, MasterCard and Discover.

This tiered processing statement shows a rate of 1.75% for Visa, MasterCard and Discover.

Finally, this tiered processing statement shows rates of 1.59%, 2.19% and 1.49% for various types of cards, but the rates are still consistent across all card brands. For example, the rate for MDBT (MasterCard debit) is 1.49%, and the rate for VDBT (Visa debit) is also 1.49%.

Why Tiered Pricing is Bad

The only benefit to tiered pricing is that it presents rates and fees in a simple, easy to read format. However, the simplicity of this pricing model makes it opaque and expensive.

The reasons outlined below combine to make tiered pricing a costly pricing model. At CardFellow, businesses save between 40% – 50% on credit card processing charges by switching to a more competitive pricing model.

Conceals the True Cost of Processing

As you can see from the example table above, a processor doesn’t disclose the actual cost. Instead, only the processor’s qualified, mid-qualified and non-qualified rates are visible. By hiding interchange fees, a business is never shown the actual cost of its processing. Thus, the processor has the ability to charge markups that are often exorbitant.

Tiered pricing makes it possible for a processor to increase a business’s processing cost without increasing its rates. Processors accomplish this by routing a greater number of interchange categories to the more expensive mid and non-qualified pricing tiers. For example, compare the table below with the table posted earlier in the Bundling Interchange Fees section above.

As you can see from the two example tables above, tiered pricing results in a different markup for each individual interchange category. The sporadic markup and inconsistent qualification associated with tiered pricing makes it impossible to compare among processors.

The Durbin Amendment that took effect on October, 1 2011 capped the interchange fee that large banks could charge at just 0.05% plus $0.21. The law capped interchange fees at the card-issuer level, not at the processor level.

This means that any business being billed via tiered pricing will pay its processor’s qualified rate instead of the newly capped rate of just 0.05%. The per-transaction loss is substantial when considering that qualified rates are typically 1.65% or higher.

With interchange plus pricing, a processor makes money by charging a fixed percentage over actual interchange rates. The markup stays the same regardless of the type of card or how a transaction is processed. The result is a low consistent markup over actual cost.

The transparency and competitiveness that interchange plus provides make it an ideal pricing model for most businesses. For this reason, it’s the only form of pricing that we allow credit card processors to quote in CardFellow’s marketplace. Sign up for free at CardFellow to receive instant competitive credit card processing quotes.

Non Qualified Rate: A Figment of Your Processor Imagination 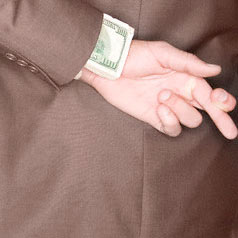