Some credit card processors play the old bait-and-switch game of advertising rates that seem too good to be true.

Spotting these shysters is easier said than done because they will in fact honor the low rates they advertise. Processors that use bait-and-switch aren’t blatantly lying; instead, they’re tactfully omitting some important details. This type of credit card processing bait and switch can be costly for your business, but there are ways to avoid it.

Interchange fees account for the bulk of credit card processing costs. No processor that wishes to remain profitable can offer a lower rate than the costs found on Visa and MasterCard’s interchange fee schedules.

Find the Bottom, and Go from There

Visa and MasterCard publish a portion of their interchange fees online, making it pretty easy to see what the lowest rates really are. Below you’ll find two screenshots taken from Visa and MasterCard’s interchange fee schedules. Each image shows the rate that applies to a transaction involving a swiped consumer credit card. These two rates represent the lowest attainable credit card processing rates for the vast majority of businesses.

What does the processor advertise?

I typed the term “credit card processing” into Google’s search bar, and then took screenshots of a few ads that appeared in the search results.

We’re not too fond of bait-and-switch advertising here at CardFellow, but I blurred the names of these companies to protect the guilty.

How could processors realistically advertise rates of 1.05% when we’ve established that the lowest credit card rates charged by Visa and MasterCard are 1.51% and 1.58%, respectively? What these ads fail to mention is that the low advertised rate will only apply to debit card transactions that have a lower interchange fee. The advertised rate will not apply to credit card transactions.

The credit card processing bait and switch method lures you in with an artificially low rate that only applies to certain transactions, and then jacks up the cost on the majority of your transactions.

Credit Card Processing Bait and Switch: How Processors Do It

Tiered pricing is a credit card processing pricing model that allows processors to set their own rates, and then route interchange categories however they choose. It’s what makes it possible for processors to advertise a rate that is too good to be true.

For example, this table shows what a typical bait-and-switch tiered pricing quote may look:

By bundling interchange fees into generic pricing tiers, processor get can route transaction however they choose. They are able to advertise rates lower than what it actually costs to process a credit card transaction because the advertised rate will only apply to less expensive debit card transactions.

How to Avoid Credit Card Processing Bait and Switch

Tiered pricing is what makes bait-and-switch rates possible. Eliminating tiered pricing stops the problem at its source. Whether your business is currently accepting credit cards, or you’re shopping for credit card processing services, be sure to consider only those processors that offer interchange plus pricing.

Interchange plus is the only type of pricing that we allow processors to quote here at CardFellow. It has the potential to be relatively inexpensive, and is far more transparent than tiered pricing.

While looking for examples of bait-and-switch rates, I noted few popular Web sites that allow processors to advertise in that manner. These examples serve as a reminder: Be wary of any advertised rates, even if they’re published on a Web site that you trust.

Merchant Account Guide
MerchantAccountGuide [dot] com is a Web site that posts a general table that arbitrarily lists credit card processors they are affiliate with. As you can see from this screenshot, they have no safeguards in place to guard against bait-and-switch pricing.

The asterisk after every rate and fee is small print that simply says: 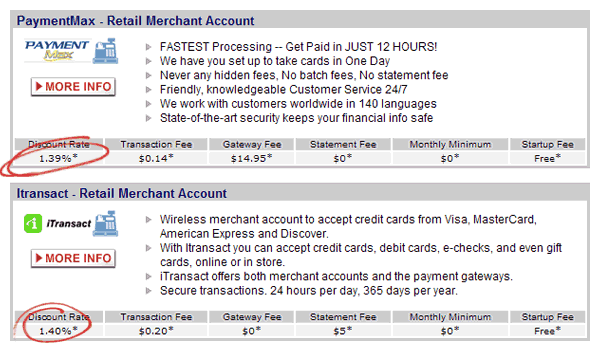 TopTenREVIEWS
TopTenREVIEWS also posts a static “comparison” table of vague rates and fees that processors charge. Note that TopTenREVIEWS may have affiliateships with companies it promotes. I’m not quite sure what to make of the rates they advertise. It almost looks like a weird combination of interchange plus and tiered rates.

To avoid bait-and-switch tactics when searching for the right credit card processor, use CardFellow’s free quote comparison tool. You’ll see accurate, fully-disclosed costs (no teaser rates!) and your rates are locked for life. Best of all, it’s free to use. Try it now!

Related Article
Playing the Credit Card Processing Match Game
The Truth Behind “We’ll Give You $500 if We Ca...
FOUND THIS USEFUL? SHARE THIS! 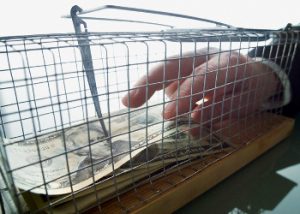