Interchange pass through pricing is a form of credit card processing pricing that allows the actual cost of processing (interchange fees & assessments) to be passed directly to your business.

The benefits of interchange pass through (often called interchange plus) are transparency and lower costs when compared to bundled or tiered pricing models.

It’s safe to say that pass through pricing allows your business to get the best credit card processing fees, which is why it’s the only form of pricing we allow processors to quote you here at CardFellow. You can get pass through quotes from multiple processors in less than five minutes by signing up for free here at CardFellow. The best processor is only a few clicks away. Try it now!

To understand pass through pricing you need a general idea of the components of credit card processing cost which are interchange fees, assessments and a processor markup. These three components are part of every credit card transaction.

Interchange fees are paid by your processor’s bank to the issuing bank of your customers’ credit card. They’re set by the members of Visa and MasterCard (the banks), and they’re the same for all businesses. Think of interchange fees as wholesale processing rates: they’re the lowest attainable rates and fee.

There are a couple hundred interchange fees between Visa and MasterCard, but it’s not necessary to familiarize yourself with all of them since many won’t apply to your business. However, it doesn’t hurt to take a look at the Visa and MasterCard fee schedules posted online to get an idea of what they look like. Here’s a snippet from Visa’s interchange table. 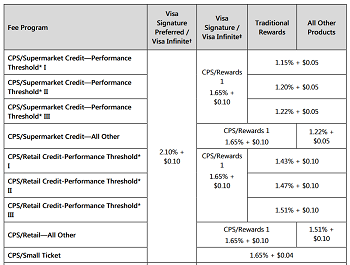 Many people are surprised to learn that Visa, MasterCard, and Discover don’t make a dime from interchange fee revenue. Instead, they make money by charging you assessments when you accept a credit or debit card branded with their logo. Check out our page on credit card processing fees to learn more about the various assessments and see current costs.

You’ll notice that some assessments apply only to a specific type of transaction, such as international, while others apply to all transactions.

The processing markup is any rate or fee beyond the base costs of interchange and assessments, and it’s the only area of cost that varies from one processor to the next. The discount rate and transaction fee portion of a processor’s markup is collectively the largest contributor to overall markup expense. But it’s not the rate that’s most important, it’s the pricing model on which the rate is based.

With other types of pricing, such as tiered, the processor’s “rate” includes interchange and assessments all bundled together, which has the effect of essentially concealing actual costs and resulting in hidden fees. You may already be familiar with qualified, mid-qualified and non-qualified rates for which tiered pricing is infamous.

Bringing it All Together

Let’s examine things a little further now that you know the components of processing cost, and you have some background on the different pricing models and benefits of pass through.

Interchange and assessments are the same for all businesses and all processors, and their sum represents the lowest possible credit card processing fee for any given transaction. Let’s take a look at an example to illustrate what I mean.

Let’s pretend that you swipe a Visa reward credit card. The interchange fee for this transaction is 1.65% plus a $0.10 transaction fee, and Visa’s assessment is 0.11% plus a $0.0225 transaction fee for a total of 1.76% plus $0.1225. Since interchange and assessments are the same for all businesses and all processors, any business that swipes a Visa reward credit card will have to pay the same rate and fee of 1.76% plus $0.1225.

There are different interchange rates for different types of businesses, such as small ticket establishments, but let’s keep it simple for the sake of this example. Our software will let you know if your business is eligible for special interchange fees when you sign up to get quotes.

Now let’s pretend that two different businesses swipe a Visa reward credit card, but Business A has a merchant account with pass through pricing of .20% and $0.10, and Business B has tiered pricing of 1.69% qualified, 2.25% mid-qualified and 2.99% non-qualified, each with a $0.25 transaction fee.

We know that the actual cost of the transaction is the sum of interchange and assessments, which equals 1.76% plus a $0.1225 transaction fee.

To figure the final rate for Business A all we need to do is add the processor’s pass through markup of .20% plus $0.10 to the actual cost of the transaction for a final rate of 1.96% plus a $0.2225 transaction fee.

As you can see there’s a lot of guess work with tiered pricing. Perhaps more importantly, tiered pricing results in a greater markup and overall processing expense.

It’s also important to note that with bundled pricing, a processor can change which transactions are charged according to which “rate” at any time. Just because a transaction with one type of card is considered “qualified” once doesn’t mean that the processor won’t charge the more expensive “non-qualified” rate for the same type of card in the future. With pass-through pricing, you won’t have to worry about that. The processor’s markup will remain the same no matter what, making it easier to see what you’re paying and to find the lowest cost option.