VizyPay is a new credit card processing company located in Iowa and processing through First Data. The company offers all standard processing methods, including via POS system or countertop terminal, online, and by phone. In this VizyPay review, we’ll take a look at pricing, services, and more.

At minimum, you’ll need $100k in annual revenue, at least a 500 FICO credit score, and at least 1 year in business to qualify. Funds are typically deposited in one business day once applications are approved.

VizyPay actually publishes quite a bit of information regarding rates and fees, which is nice to see. The company lists rates on an interchange plus pricing model. The published rates are as follows:

Note that these costs are in addition to interchange, which is the largest component of credit card processing costs.

*VizyPay defines Mini Merchants as businesses processing less than $5,000 or fewer than 100 transactions per month. 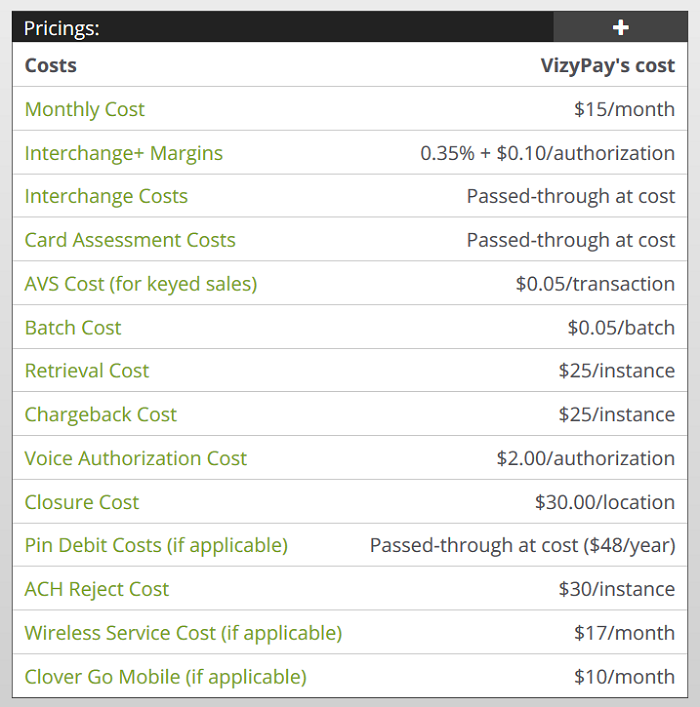 As you can see, VizyPay also lists any fees that you may be charged for as they occur, such as chargeback fees. You’ll only be charged those fees if something triggers them – for example, you’ll get a chargeback fee if a chargeback is initiated. While per-occurrence fees aren’t part of your usual monthly costs, they can add up and it’s nice to see VizyPay list those clearly. The company has similar disclosures for its online and mini-merchant pricing.

VizyPay claims there are no long-term contracts and no equipment leases.

Want to see how the pricing with interchange would look for your business? Request a quote from VizyPay through your CardFellow. It’s free and private, and there’s no obligation. Try it now!

As a reseller for First Data, VizyPay supports equipment on the First Data platform, including the Clover Station POS system and the Clover Go.

The Clover Go works with both Apple and Android phones and lets you take EMV chip cards through your smartphone or tablet. A basic (non-EMV) reader is also available. If you want to take contactless payments like Apple Pay, you can choose the Clover Go contactless option. For countertop terminals, the company supports FD equipment like the FD130.

In addition to First Data equipment, VizyPay offers universal terminals from Verifone, like the popular EMV-capable Vx520. The company conveniently lists the current pricing (excludes shipping) on its website.

When it comes to online payments, VizyPay supports the popular Authorize.Net gateway, First Data’s Payeezy gateway, or the USAePay gateway. Depending on your needs, any gateway could be a good fit. Need help deciding? Sign in to get quotes and then give us a call.

Likewise, all five facebook reviews give the company 5 stars, but some of them are duplicates from the google reviews. The unique reviews mention being happy with the company, saving money, and appreciating a local business.

Have you worked with VizyPay? Leave a review!

Very happy with VizyPay. Customer support is prompt and friendly. Rates are extremely competitive, but having superior customer support is by far one of the biggest benefits over any cost savings for my small biz. It's nice to feel like someone is looking out for me and my business!

VizyPay is a very new company, but it's nice to see them promoting transparency by publishing pricing and details.

View Processor's Feedback
Transparency is the key word in your review! Thanks for taking the time to look into VizyPay :)
Review sent
Great. We've sent your review
and it will be online
shortly