The Dodd-Frank Wall Street Reform and Consumer Protection Act, enacted in response to the late-2000s recession, contains the most comprehensive set of changes to financial regulation in the United States since the Great Depression.

Within that, a relatively small portion of the act – the “Durbin Amendment” – has made decisive and controversial changes in the way debit cards are processed. These changes are meant to lower the financial burden on businesses and are already affecting businesses across the United States.

“Interchange” is at the backbone of the credit card processing system. Interchange is discussed in more depth elsewhere in this blog, but it can essentially be thought of as the wholesale rates for processing credit card transactions, which in turn govern the fees that businesses end up paying each time a consumer pays with a credit or debit card. There are hundreds of interchange categories, with different costs associated. Here’s a snippet from Visa’s interchange schedule: 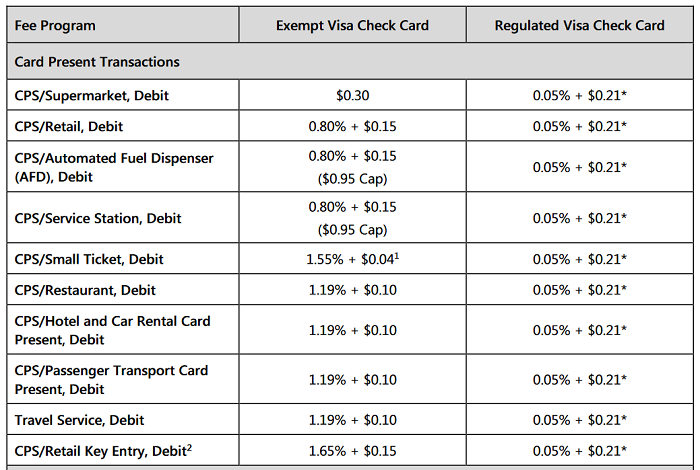 Interchange is basically uncompetitive in the United States, with Visa and MasterCard (which control 80% of the market) deciding the fees that are applied nationwide. Largely as a result of this, the United States has some of the highest interchange fees in the world. The Durbin Amendment regulates interchange in a new way.

Changes in the Durbin Amendment

There are several components. Some things the Durbin Amendment changes:

Let’s take a deeper look at what this all means.

Passing Both Processing Fees and Savings on to the Consumer

While businesses can set a minimum purchase amount for credit transactions, they previously weren’t allowed to charge extra for card usage. However, a 2013 lawsuit changed that.

Pre-lawsuit, Visa had the following rule: “You may not impose any surcharges on VISA transactions. You may, however, offer a discount for cash or another form of payment (e.g., proprietary card or gift certificate) provided that the offer is clearly disclosed to customers and the cash price is presented as a discount from the standard price charged for all other forms of payment.” The other card brands had similar rules. Note that while the Durbin Amendment allows for setting a minimum to use a credit card, minimums are not permitted on debit cards.

Now, however, the rules explicitly permit surcharging for credit cards (NOT debit cards!) provided you follow the card brands’ requirements as far as notification and caps on fees. However, there are still 9 states where surcharges are not permitted due to state law. 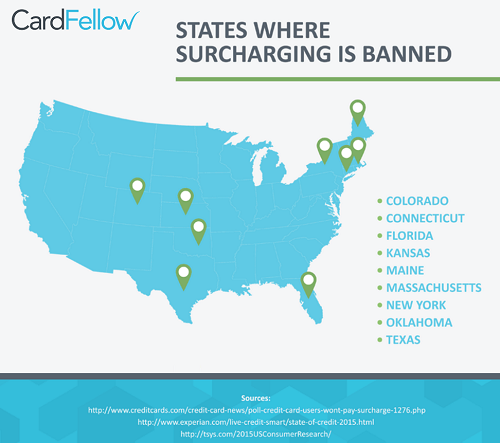 The Durbin Amendment requires processing banks with assets over 10 billion dollars to charge processing fees that are “reasonable and proportionate to the actual costs” of processing the transaction. The Federal Reserve has proposed a cap on signature debit and PIN debit card interchange fees at $0.21 plus 5 basis points (0.05%). Banks that meet certain fraud deterrent guidelines may tack on another penny.

There are a number of debit card networks that can process debit card transactions. Of course, all of them do business differently, and some charge less or more than others than others in the industry. However, until recently, it was common for card brands like Visa and MasterCard to require merchants to exclusively process their cards on one network. The Durbin Amendment allows businesses a choice of which network processes their transactions, creating the opportunity for market competition where there was none before. This may open up avenues for savings for businesses who investigate their options.

In the final analysis, it’s difficult to predict the variety of effects the Durbin Amendment’s changes will have on businesses, consumers, and banks over time. However, there is a clear opportunity for businesses to save money.

In the years since the Durbin Amendment was enacted, many organizations have tracked it’s effects. A lot of businesses did save on debit processing costs, but perhaps one of the largest unintended consequences was the effect on small tickets. The Durbin Amendment’s 21 cent transaction fee hit harder on businesses with small average tickets, causing those businesses’ processing costs to increase instead of resulting in savings.

Retail groups contend that the Durbin Amendment only scratched the surface of needed regulations and say that further caps are needed, while banks and others claim that the caps have not had the effect of lowering prices for consumers. This image from the Electronic Payments Coalition hints at the intensity of the debate, laying blame on retailers: 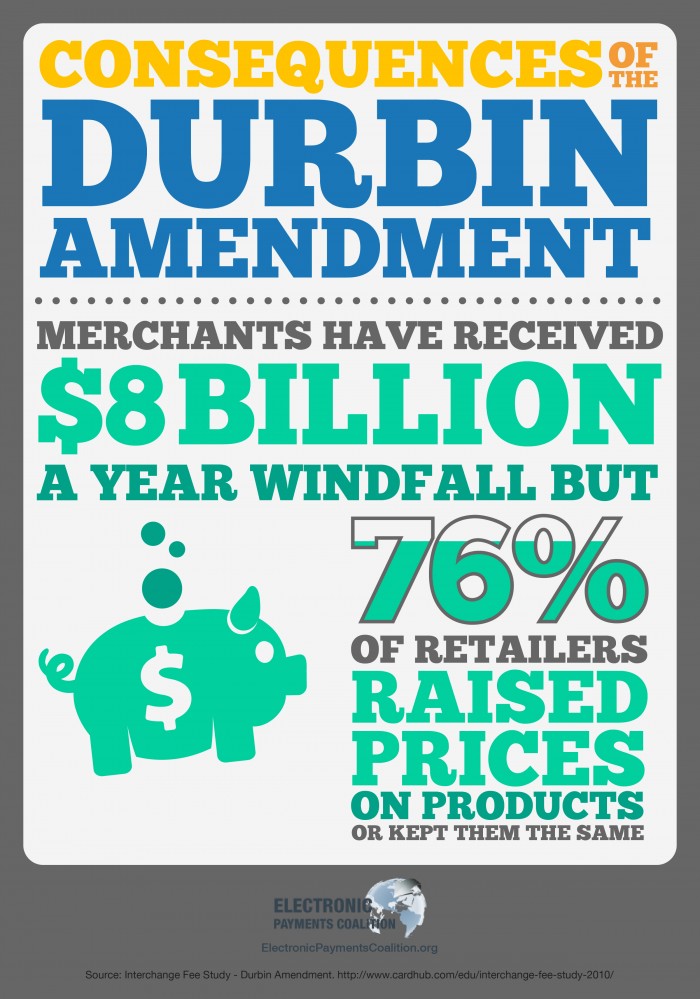 The image gives no indication as to whether other factors like healthcare costs or minimum wage changes played a role in the raised prices, instead implying that it’s a direct result of the Durbin Amendment. As with most regulations, the truth is more complex than what can be summed up in a quick image designed to invoke a response.

In 2017, the government began looking into repealing Dodd-Frank, and with it, the Durbin Amendment. The proposed alternate bill, the Financial CHOICE Act, passed in the House in early summer 2017. However, prior to passage, repeal of the Durbin Amendment was dropped from the bill. For the time being, the Durbin Amendment remains in effect. We’ll continue to update this article with more information as it becomes available.

FOUND THIS USEFUL? SHARE THIS!
Back To The Top
OUR COMPANY
HELPFUL RESOURCES
PROCESSORS
Get started now!
info@cardfellow.com