In March of 2017, Visa announced a staged digital wallet fee that will take effect in April of 2017. This comes well after Mastercard imposed a similar fee in 2013. Visa’s fee could result in higher interchange costs for small businesses.

Which wallets does this affect, and will your business pay more to take digital wallets? Let’s dig into the details.

For a quick reminder, a digital wallet refers to an electronic system that allows customers to pay for purchases without presenting a physical credit or debit card. Customers load their card details into the digital wallet app of their choice, and pay by tapping their smartphone or smart watch to a compatible terminal or by selecting their choice from stored payment methods when making an online purchase. Apple Pay and PayPal are examples of digital wallets. 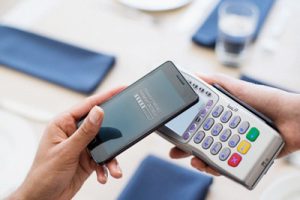 For a more detailed explanation, check out the link below.

Given Visa’s past comments, it may not be a surprise that the company has chosen to update their fees. In 2013, when Mastercard announced its own staged wallet fee, Visa CEO Charlie Scharf stated that it would not be imposing the same fee at that time, but added that it would be, “Totally appropriate to do that.”

Here is the text of the announcement Visa sent regarding staged digital wallet fees:

Effective April 22, 2017, Visa will assess a transaction fee of $0.10 for staged digital wallet transactions. The fee will apply to purchase transactions and account funding transactions, identified by the “WT” Business Application Identifier (BAI).

These transactions are subject to Standard interchange rates and are not eligible for Custom Payment Service (CPS) qualified rates.

“Standard” interchange rates for Visa are typically 2.95% and 10 cents per transaction. From the wording of the announcement, it sounds like an additional 10-cent fee will apply on top of the 10-cent portion of the standard interchange category.

We’ve reached out to Visa for clarification, and will update this article with additional information as it becomes available.

Where the two fees differ is in who pays directly. Mastercard’s fee is aimed at the digital wallet operator (for example, PayPal itself) while Visa’s fee affects interchange, which businesses pay through their processor.

By charging the higher “standard” interchange rate for staged wallet transactions, Visa ultimately raises the base cost of processing those transactions, which will raise a business’ costs. That’s not to say Mastercard’s fee is necessarily cheaper, as a digital wallet operator could simply choose to raise their pricing to cover the wallet fee, effectively passing it on to the business.

In 2016, Mastercard and PayPal reached an agreement that eliminated the Staged Digital-Wallet Operator Annual Network Access Fee for PayPal. It may still apply to other staged wallets.

Staged vs. Pass Through Wallets

It’s important to note that the staged digital wallet fees only apply to “staged” digital wallets and not to “pass through” mobile wallets.

A staged digital wallet is a wallet that uses multiple “stages” to complete the transaction- a “funding” stage and a “payment” stage – and doesn’t necessarily pass along card information to the card brand or issuer. With a staged digital wallet, the first “stage” is the funding stage, where the wallet acquires money from the purchaser. The second stage is the payment stage, where the wallet operator provides money to the business. The wallet essentially acts as a middleman. With a staged wallet, the card issuer or card network doesn’t necessarily know what type of card was used or other useful information.

A pass-through digital wallet is a wallet where card payment information is used directly in the transaction, and passed along to the issuer and card network. In many cases, a smartphone or other physical device may take the place of the physical debit or credit card, but the information from the card is still provided. For example, you may select a credit card in your Apple Pay menu and “tap” your phone to a compatible credit card machine to pay. Even though you didn’t swipe your credit card, your card details were used (by your smartphone and the machine) to make the purchase.

In 2013, Mastercard was not shy about explaining its rationale:

“We view these new fees as an effective vehicle for diffusing much of the frustration that exists among incumbents who today view PayPal as a free rider. We would not be surprised to see other incumbent payment networks follow [our] lead.”
Source: NFC World.

In 2016, Mastercard CEO Ajay Banga reinforced the idea that Mastercard’s issue is with staged wallets due to lack of information:

“If you do things that make it complicated for the ecosystem to work cleanly I’m not going to be supportive.[…] my view is the merchant must know which card was used to purchase the product. […]The data should flow cleanly back and forth. It enables the issuer, it enables the merchant, it enables the network to control fraud and do things with it. The moment you create a staged wallet, where you create a mix of different cards[…]I don’t particularly like it. You’re using my rails to play games with my client and me, that’s the problem.”
Source: Diginomica.

Essentially, the card networks want to discourage digital wallet companies from using their network without passing along information about the transaction.

Does the staged wallet fee affect my business?

Maybe. The businesses that will be affected are those that accept digital wallet payments from staged wallets – PayPal, Square Cash, etc. – for Visa transactions. If that’s your business, you should expect to pay the higher “standard” interchange rate for those transactions.

You will not be affected if you accept Apple Pay, Samsung Pay, Chase Pay, Android Pay, or any other pass-through NFC wallet.

Be sure to look at your statements or contact your processor if you have questions about your costs for specific digital wallet transactions.

For Visa transactions, the staged digital wallet fee’s biggest impact is that it effectively “downgrades” some digital wallet transactions to more expensive “standard” interchange categories. Unfortunately, there are many things that can cause a transaction to downgrade, so the presence of a “standard” interchange category on your billing statement doesn’t necessarily reflect the staged wallet fee.

However, it does provide an indication that you were charged more for that particular transaction than for other transactions. Look through your billing statement for the words “standard” or any variation, like STD or STND. That indicates the “standard” interchange category and is worth exploring further with your processor.

The Visa staged wallet fee has not gone into effect at the time of publication, so CardFellow has not yet seen examples firsthand of how the fee may be listed on statements. We are attempting to clarify with Visa if the 10-cent fee will be listed as an assessment, and will update this article when we have more information.

If you’re an existing CardFellow client and see a standard interchange category on your statement, be sure to send us the statement so we can help you identify and possibly correct the cause of the downgrade.

If your processing costs are already too high and you’re looking to lower them, CardFellow can help. With a shopping marketplace that offers quotes from leading processors and boasts a lifetime rate lock, no cancellation fees, and statement auditing to ensure optimal interchange, you can quickly and easily find a solution with great pricing and great terms. Best of all, it’s free and there’s no obligation.

Try it for yourself by filling out our short information form. (Don’t worry, we won’t share your contact info!)