What do Facebook, Uber, Netflix, AirBNB, and Spotify have in common? They all use Adyen for their payments. The Dutch company was founded in 2006 and has recently been enjoying publicity in the United States from big name publications like Forbes and Bloomberg. Okay, great… but you’re not Facebook, and your business needs are different than Netflix’s. So how do you know if Adyen is the right credit card processing company for you? That’s where this Adyen review and profile comes in. We’ll give you the objective details you need – everything from Adyen’s rates and fees to the services and customer reviews.

What’s the big deal with Adyen?

One thing that journalists and businesses are focusing on is Adyen’s exceptional number of supported currencies. As of 2016, the company supports payments in 189 currencies, the highest number of any processor. If you take a lot of international payments, that could be a big plus for your business. If you don’t, there’s no reason to get hung up on how many currencies you could take.

The volume of transactions also gets a lot of attention. In a September 2016 article, Bloomberg states that Adyen processes $50 billion per year, claiming that number is twice the amount of competitor Stripe, and 40% more than competitor Square.

In October 2016, Etsy announced that Adyen would handle payment processing for the company’s popular craft marketplace. The change follows a month-long outage and headaches that Etsy had with previous processor Worldpay earlier in 2016. 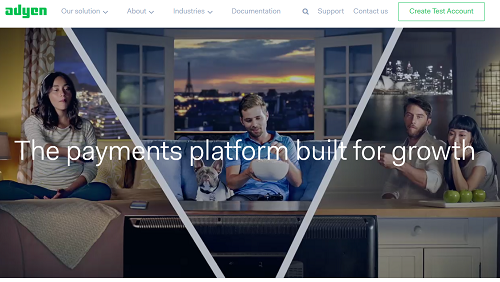 So what can Adyen do?

The company’s primary focus has been on internet payments. Mid-size and large companies that run ecommerce sites or take payments online are Adyen’s typical customer. But the company is also expanding to in-store payments, including with contactless (NFC) technologies Apple Pay and Android Pay.

With Adyen, you’ll be able to take an extensive range of credit cards, well beyond the usual 4 (MasterCard, American Express, Visa, and Discover) that are usually accepted.

Adyen offers hosted payment pages for online transactions, adding a level of security and potentially reducing your PCI compliance scope. You’ll be able to control the look of the pages while keeping data secure on Adyen’s servers.

If you’d prefer to use a direct API, Adyen offers that, too. Just remember that you’ll be responsible for security when using an API option. Adyen also offers plugins for popular ecommerce options, including Magento, Prestashop, and more.

Exact pricing can be a bit complicated on Adyen’s pricing table. The company may offer interchange plus in some situations, but also appears to have a flat rate for certain transactions, such as American Express.

Interested in an Adyen quote tailored to your business? Request pricing through CardFellow and you’ll get fully-disclosed pricing and no sales calls.

Despite being around since 2006, Adyen is just starting to gain more traction and visibility in the US, and it’s likely that we’ll start to see more reviews as that happens. For now, Adyen reviews are pretty limited. The company isn’t accredited with the Better Business Bureau, though it does have a profile (with an A- rating) on the BBB’s website. There’s only one complaint against Adyen with the BBB, alleging that Adyen took money without providing service.

If you’ve used Adyen, help other businesses. Leave a review!

Adyen supports a ton of international currencies, so if you take lots of payments from foreign customers, it can be a good option.