Using a PayPal Account In Store: Cards and the PayPal App

Okay, technically it’s been here for a little while, but the number of stores that can accept PayPal is about to shoot up dramatically with the official beginning of First Data’s in-store PayPal acceptance.

The two companies have reached an end to a 3-year-old disagreement where First Data would not allow PayPal transactions. PayPal also reached deals with Visa and Mastercard. This shows that PayPal is willing to play nice with the card brands it has previously clashed with, and is serious about eliminating previous hurdles that have prevented it from being used easily offline.

This comes as Apple Pay is ramping up its use in online transactions, PayPal’s bread and butter, so it’s no surprise the company is taking in-store payments more seriously. Let’s take a look at the agreements and what it means for accepting PayPal.

This article is for businesses looking for information on accepting PayPal cards in store or taking PayPal app payments through a contactless/tap-to-pay terminal. If you’re a customer looking for stores that accept PayPal, you can use PayPal cards anywhere that Mastercard is accepted, and the PayPal wallet/app anywhere that Discover contactless payments are accepted. As such, there are no current lists of who accepts PayPal. Be sure to contact the specific store if you’re unsure.

If you’re looking for information on taking PayPal on your website, go here.

The first thing you’ll notice is that there are multiple ways to take PayPal, and even multiple different accounts. Here are the terms to know:

The PayPal wallet is the general term for a PayPal account, where you link bank accounts or your credit or debit cards. It’s a digital wallet, meaning you can use it to pay online without digging your card out of your physical wallet, or you can pay in stores using contactless (NFC or “tap and pay” technology) with the PayPal App.

PayPal is what’s known as a “staged” wallet, meaning that it processes a transaction in two staged. First, it collects money from the purchaser, and then it remits it to the business, without necessarily passing along card details to the issuer or credit card network. Because of this, PayPal transactions may be subject to Visa’s staged digital wallet fee, implemented in April 2017.

The PayPal App allows you to use PayPal on your Android or Apple smartphone. Phones can be “tapped” to a compatible terminal in stores to make a PayPal payment.

Also known as PayPal credit, Smart Connect is PayPal’s line of credit. It can be used to pay for goods and services online. As mentioned above, you can only have a PayPal Extras Mastercard or a PayPal Smart Connect account, not both.

Accepting PayPal branded Mastercards at your store doesn’t require any shift in how you do things. Since it’s a Mastercard, the PayPal card can be swiped or dipped in your credit card machine or point of sale system the same as any other Mastercard, and you’ll pay the same rates and fees your processor charges for other Mastercard card-present transactions.

That doesn’t mean that you can’t do better on the costs, though. See how much you could save by trying out this free credit card processing quote comparison tool.

Taking the Mastercard/PayPal Business debit card works the same as taking credit cards; however, you could be leaving money on the table if you’re not taking advantage of lower “enhanced data” rates for processing. MasterCard offers special rates for business cards (including business debit) if you comply with certain requirements. You’ll need to provide specific information (known as Level 2 or Level 3 data) but your processor may be able to work with you to get set up to automatically fill in the required fields.

If you take a lot of business cards, enhanced data could save anywhere from 0.45% – 1.15% per business card transaction, so it’s worth looking in to.

The PayPal app follows the same process as existing tap-to-pay options like Apple Pay. Customers that use the PayPal app can link their cards or bank account to the app and use it to pay at Discover-capable NFC (contactless) credit card terminals. You may also have the option to use PayPal in store through Samsung Pay.

In the case of the PayPal wallet, the costs are a little less clear. Information from First Data, along with a FAQ sheet from PayPal, indicates that mobile payments will be charged according to a PayPal interchange schedule, which parallels Discover’s.

PayPal states on its website that when customers enable the Tap & Pay feature, PayPal will create a virtual Discover account on their phone, which will be used during tap to pay. PayPal’s FAQ sheet about mobile payments specifies that it will charge tap to pay transactions according to Discover’s fee schedule.

However, the website also states that your customer’s PayPal account balance (if any) will be used first, and remaining amounts due will be paid from the payment method they’ve specified in their PayPal wallet. (If the method they’ve specified is declined for some reason, it will then go to one of the backup payment methods in the PayPal wallet.) So, if a customer is paying with a Visa or Mastercard as the payment method specified in their PayPal app, it’s not clear how that would be charged, as it would normally fall under the Visa or Mastercard interchange schedule and not run on Discover’s network.

A request to PayPal for more information has gone unanswered.

Where First Data Fits In

I mentioned that in-store PayPal payments have been possible for a couple years, but until recently, they were missing a major piece of the puzzle: acceptance through First Data. It’s the largest credit card processor in the world, serving everyone from small businesses to Walmart. Previously, First Data didn’t allow for PayPal to be used on its platform. That refusal goes back to 2013. Back then, Discover and PayPal were working together to boost PayPal in-store acceptance only to be declined by First Data. Despite the fact that PayPal and Discover were able to secure support from other large processors (including TSYS and Vantiv) that was a huge restriction, as First Data accounts for billions of dollars in payment processing and has approximately 40% market share, according to pymnts.com.

First Data’s concession to allow PayPal payments in stores is a major win for PayPal.

Businesses that use First Data (or a First Data reseller) should have received notification about the ability to take PayPal in stores. Though rumors of a First Data/PayPal agreement have been circulating for several months, letters announcing it are dated September 2016. The letter explains that your customers can pay in-store using either the PayPal app (on their smartphone) or using one of the PayPal cards discussed earlier in this article.

What’s in it for PayPal?

The agreements benefit PayPal by allowing them to compete directly with other digital wallets. Consumers (many of whom already know and use PayPal) can download the app or get a PayPal card and expand their usage into stores instead of only using it for online transactions.

Additionally, MasterCard agreed not to charge PayPal a digital wallet operator fee in exchange for PayPal not steering customers to ACH transactions/using their bank accounts. Both Visa and Mastercard are reportedly offering volume discounts to PayPal, according to the Wall Street Journal.

How do the card brands benefit?

For one thing, PayPal has agreed to stop pushing ACH (bank transfers) instead of linked credit card payments. For another, PayPal-owned Braintree will allow Masterpass and Visa checkout transactions. PayPal will provide data to Mastercard on PayPal Mastercard transactions.

If customers use their credit cards instead of their bank accounts, PayPal will pay Visa and Mastercard, which wasn’t the case when PayPal steered customers to ACH payments.

Consumers and small businesses will be able to instantly cash out PayPal funds to a debit Mastercard, which may also encourage more Mastercard transactions. You can read more about the agreement in Mastercard’s press release.

What’s in it for First Data?

That’s a little less clear. If PayPal is paying First Data, neither company has publicly announced it. While First Data makes money on transactions, the company doesn’t appear to be missing opportunities due to customers seeking out PayPal-accepting businesses. Any benefits would be speculation at this point.

The First Data merchant letter states that PayPal in-store transactions will follow a “PayPal Interchange” schedule. That schedule parallels Discover’s interchange. That makes sense, given that PayPal’s website refers to routing transactions through a Discover card when customers enable the tap to pay feature on their PayPal app.

The table below outlines PayPal’s interchange.

Additionally, PayPal assessments will be charged at 0.10% (of gross volume) with a PayPal Auth Fee of $0.0185 per authorization request.

Remember that just because businesses that use First Data (or a reseller) can accept PayPal doesn’t mean they automatically will. To take PayPal mobile payments, a business will still need to have a compatible contactless (NFC) credit card machine and support for NFC transactions. It’s worth noting, however, that many EMV (chip card) terminals are also NFC capable. So as more businesses upgrade due to chip cards, they may also be able to accept contactless payments.

See also: What’s the difference between EMV and NFC?

Do I have to take PayPal in my store?

PayPal cards, yes. Your agreement with Mastercard specifies that you’ll honor all valid Mastercards, so you’d need to accept a customer’s PayPal Mastercard.

PayPal app/tap payments, maybe. If you don’t have a compatible NFC/contactless terminal, you’re under no obligation to purchase one or to accept PayPal tap-to-pay transactions. However, if you do have and use an NFC terminal (such as for accepting Apple Pay) then you generally wouldn’t be able to prevent a customer from using the tap function with their PayPal account and the PayPal app.

If you do see costs going up as a result of PayPal transactions, compare your pricing to other processors. Use CardFellow’s credit card processing quote comparison tools to avoid overpaying. 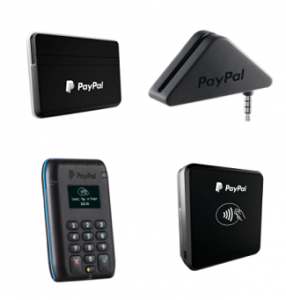