Flat rate credit card processing is an expensive illusion based more on clever marketing than reality. What some companies advertise as a competitive flat rate is actually oversimplified and expensive pricing that conceals the true costs to process.

If you’re considering a flat rate credit card processing company, here’s what you need to know.

What is flat rate pricing?

Flat rate is an increasingly popular pricing model for credit card processing. The most prevalent version of flat rate processing is where a company charges its clients based on a fixed percentage of volume. Common flat rates are currently around 2.75% – 2.9% for swiped transactions. Some flat rate models also include a per-transaction fee, often in the range of 20 – 30 cents per transaction.   Note that this is different than subscription flat rate pricing, where the costs of interchange are still visible to the business.

Flat Rate Pricing is An Illusion

The fundamentals of credit card processing make it virtually impossible for a processor to charge a competitive flat rate and remain profitable.

Interchange fees and assessments are fixed costs that remain the same regardless of which credit card processing company a business uses. Assessments remain fairly consistent across different types of transactions, but interchange rates fluctuate over about 280 different categories.

The interchange rate assigned to an individual credit card transaction varies from 0.05% to 3.17% depending on several variables such as card type, card brand, processing method, settlement time, and more.

A processor that offers its clients flat rate credit card processing still has to pay interchange and assessments; it just does so behind the scenes without its clients knowing.

For example, Square charges its customers a flat rate of 2.75% for swiped and 3.50% for keyed transactions that only cost it about 1.40% and 1.95% on average. The difference between interchange and its flat rate is Square’s markup.

Companies that offer this type of pricing are not actually “real” processors. Instead, they are aggregators that use one merchant account to process transactions for thousands of businesses.

As I’ll explain in greater detail below, this type of flat rate pricing is inherently uncompetitive because an aggregator has to ensure its flat rate is high enough to cover all possible base costs associated with interchange and assessments as well as its markup, and base costs vary greatly.

A pricing model called interchange plus pricing allows businesses to have the best of both worlds — a flat, fixed markup from the processor and competitive pricing.

Flat rate pricing has two redeeming qualities; it’s simple and it is sometimes offered without a transaction fee, which can be beneficial for businesses with lots of transactions. With flat rate pricing, you’ll also have known costs that don’t change, making it easier to calculate what you’ve paid or can expect to pay based on your volume and ticket size.

It’s relatively easy to forecast what charges will be with fixed-rate pricing. Simply multiply gross sales by the processor’s rate to calculate charges.

Simplicity seems like a small comfort considering flat rate pricing is typically 20% more expensive than other forms of pricing, but nonetheless, some businesses are willing to pay to have a flat rate. Paying more foe convenience may make sense for your business, just remember that in most cases you will be paying more. Don’t confuse simplicity with low cost.

Some processors offer flat rate without a transaction fee. That makes it an ideal pricing model for businesses with very low average tickets.

For example, 2.75% of a $3 sale is only $0.0825, which is lower than what the processor pays in interchange charges. So, aggregators that don’t charge a transaction fee actually lose money by processing for businesses with very small average tickets. Square lost $30 million processing for Starbucks because of the low average transaction total.

Don’t be fooled by simplicity. Instead, side step fancy marketing ploys like flat rate pricing for truly competitive rates and fees like those offered by processors here in CardFellow’s marketplace. CardFellow only allows processors to use true pass-through pricing, making it easy for our clients to compare and select an exceptionally competitive processing solution.

Curious what you’ll pay for processing if you don’t use a flat rate solution? Find out now. 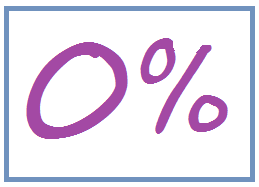